At last week’s EPiServer techforum in Oslo, EPiImage won the “EPiCode module of the year” award. I would like to thank EPiServer Norway for the award, and also thank all the great developers that have contributed with feedback, testing and code to make it what it is today.

For a quick intro to EPiImage, check out this 2 minute video: 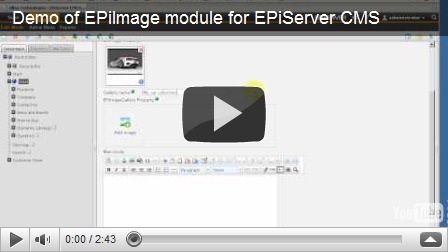 A 2 minute video demo of the editor features of EPiImage

The most exiting new feature of this release is the ability to drag files and even whole folders from the action window straight into an EPiImageGallery Property. (See the video above to see what it looks like.) A big thanks to Thomas Leela at EPiNova for creating and submitting this feature to the project.

Work has started on version 2.0

Since the release of EPiImage I have gotten tons of feedback, code snippets and feature requests. I am now sorting through them and will add the best submissions into version 2.0. What is certain is that there will be quite a bit of refactoring of the code.

Here are some of the features I hope will be part of the 2.0 release:

-Preview of alt texts when you hover over the “I” button

I need your help:

There are a few features/issued that I need help with:

-Prev/Next button bug in the EPiImageGalleryViewer: The prev/next buttons are still showing if you have only 1 image in the gallery.

-Using the built in EPiServer resizer: The best solution performance wise would be to use the EPiServer.ImageLibrary.ImageService to resize the images.

The full project source code is available at EPiCode

Working on the beta for 2.0 and now I have gotten EPiServer.ImageLibrary.ImageService to resize the images to work :-)