Code deployment in EPiServer, not to be confused with content,  is typically done using the preferred .NET deployment tool. EPiServer enables a flexible choice to be implemented as appropriate for your solution based on your requirements, toolsets, and preferences. This could be as simple as utilizing the Visual Studio Publish feature for manual deployment or by using automated build/publish scripts with tools like Microsoft TFS and MSBuild. As an additional example, others have used alternate preferred solutions such as Subversion for Source Control and CruiseControl.NET for build and deployment.

I had documented the high level manual steps for using Visual Studio 2008 some time ago but, wrapped up and juggling many other things, I’d never posted it.  It’s a bit dated since the specific details and screen shots are based on that rusty old Visual Studio 2008 but should still prove useful for many.

The high level steps are as follows:

1. On the Development Workstation

2. On the Target Web Server 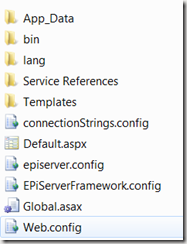 3. On the Target Database Server

4. On the Target Web Server