The goal of this tutorial is to outline how to implement moderation for group membership admission. The tutorial describes an interconnected relationship between four social services: groups, members, workflows and workflow items.

A working Episerver SocialAlloy site. This repo can be pulled from the Episerver Github page. 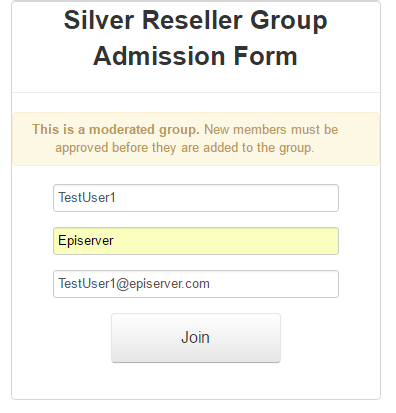 The Silver Reseller GroupAdmissionBlock on the Silver Reseller CommunityPage in the SocialAlloy starter site has an existing workflow associated with it. All users who request to join this group are entered into membership moderation. 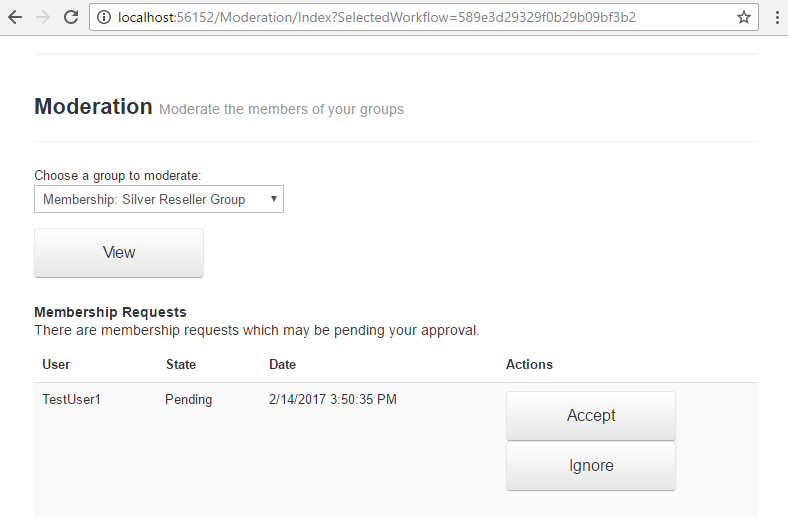 A user has been entered into the workflow for the Silver Resellers Group. This group has an existing workflow associated that has an initial state of “Pending.” The two actions that can be taken on that state that are “Accept” and “Ignore”. 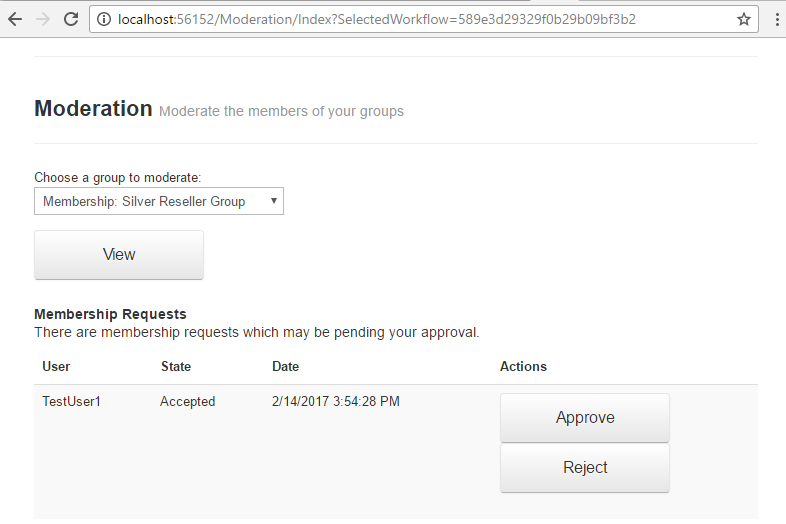 If the “Accept” action is taken, the member admission entity enters into a new state called “Accepted”. The available actions from this state are “Approve” and “Reject”. 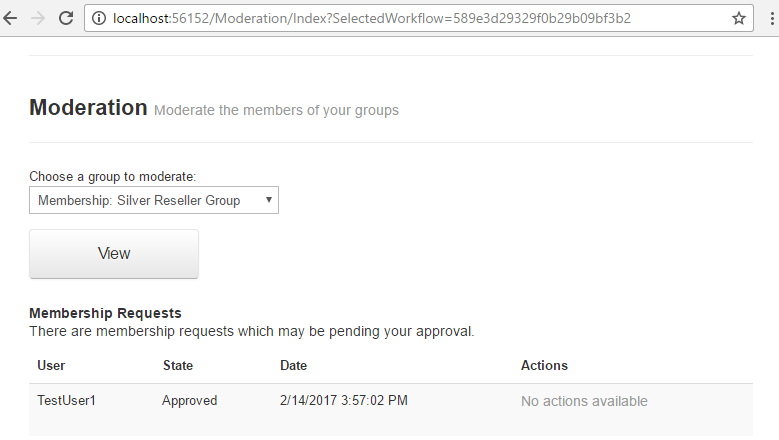 If the “Approve” action is taken, the member enters into a new state called “Approved”. No additional actions can be taken once this state is reached. This is one potential end to the community membership workflow. If a moderator had taken either the “Ignore” or “Reject” actions, the outcome to the member request would be “Rejected”.

Before Creating a Moderation Strategy

It is important to clearly identify the business process that you are looking to translate into a workflow. The Social Framework provides methods to create and interact with a workflow. However, the relevant entities of a workflow can differ greatly between use cases.

Managing the business specific components with a clearly-defined process in advance of implementing the Social Framework will result in an uneventful and enjoyable development experience.

The SocialAlloy starter site is seeded with existing groups. These groups have corresponding workflows that allow for membership requests into the group to be moderated. An example of method used to add a workflow can be seen below:

There are four separate sections to this method that are important to take note of.

The GroupAdmissionBlock facilitates the addition of members to groups within SocialAlloy. When a group is created with membership moderation, the block internally calls the AddAModeratedMember method on the CommunityMemberModerationRepository when a user requests membership to the group.

The AddAModeratedMember method can be divided into four distinct sections:

Below is an example of a Moderation View. This is a standard moderation interface that allows a user to select from a list of existing Workflows, displays existing membership requests for a workflow, and acts on available actions for each member request.

The CommunityMemberModerationRepository was built with a Get method that returns everything you need to build a moderation screen.

The retrieval of the CommunityModerationViewModel consists of three major parts.

** It is important to note that this example uses an adapter class that works with available objects to produce a different, client suitable object that the view can interpret.

When looking to moderate a specific workflow item, an interface needs to display available items to moderate and actions that may be taken on them. This shows an example of how displaying those items and actions could be done.

Once a moderator has taken an action on an item in moderation, that action must be managed in a meaningful way within the Social Framework. For this tutorial, a Moderate method was created in the CommunityMembershipModerationRepository to account for what should happen when an item in moderation is acted upon.

The method can be broken down into 8 simple steps.

* Repositories in the SocialAlloy site are responsible for the sole point of interaction with the Social API. Social constructs have been abstracted away by site specific entities in order to separate the business logic of the site from the Social API integration points.

* It is important to note that the extension data for the SocialAlloy site has been moved to its own project by design. Compartmentalizing extension data and adding that project into a site solution ideally make namespaces more stable and less susceptible to changing over time. Additionally, by separating the extension data, it should be very easy for a user to reference the same POCOs in their staging site that they are referencing in their production site.