XForms in EPiServer CMS contains logic to store and present forms and data posted from forms. Together with the forms editor in Edit mode it enables editors to create and modify forms and to view form data. The XForms architecture enables customization, allowing developers to adapt the XForms functionality. This document describes how the technology is built up and answers common questions concerning XForms in EPiServer CMS.

Editors that create forms in Edit mode work with Internet Explorer's HTML edit functionality. When saved, the content of the form is transformed using regular expressions and stored as a mix of XHTML and XForms markup.

Note: When using this approach, EPiServer CMS does not support the client side functionality that may be available when using an XForms browser plug-in.

From EPiServer CMS 4.60 a new concept called form folders is introduced in EPiServer CMS. This makes it possible to organize a group of forms in a folder structure, which can be useful if the site contains many forms.  It is also possible to set a default folder for forms for either the entire Web site or parts of the Web site, making it easier for editors to manage forms. This is done by adding a dynamic property named "DefaultFormFolder" and then setting the property value to the folder of your choice for the part(s) of the Web site you want to affect. 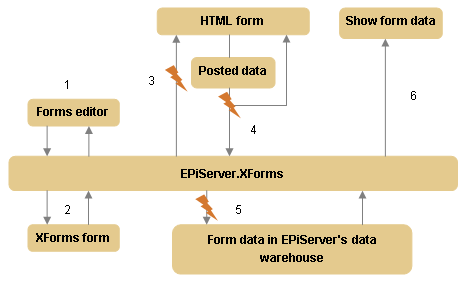 Note: Even though this example shows a form that is structured using HTML tables, there are no limitations that do not allow the structure of the form using other elements as the ‘div’-element. From EPiServer CMS 4.60 the built in form editor creates a form using HTML tables.

The XForm class has a method, GetPostedData that allows you to extract data posted to the database. The method will return an IList containing XFormData objects for the form in question. The Sid property for an XFormData contains information about the user that has posted the form.

If you want to change the appearance of the XForm Web controls, it is recommended that you do this by adding or modifying the attribute collection for the control. By using CSS and setting the class attribute for the control, you should be able to do a lot for the appearance of the form control. From EPiServer CMS 4.60 there is a method, called ExtractXFormControls, that can be used to get an ArrayList containing the input elements for the form.