Swedish authorities have a long way to go before they will reach the EU requirements on their Web sites to be accessible to everyone regardless of equipment, such as to work in all major browsers with support for web standards as well as have facilities for the disabled. This despite the fact that the EU objectives from the Riga Summit in 2006 should be met by next year. This conclusion is presented in a report of the accessibility of Swedish authorities' web pages that Marcus Lindblom and Niklas Jägerklou from Meridium have presented on the Web site Validerat.se.

Validerat.se has automatically scanned authorities and public companies' Web sites for errors and violations of the technical standards which ensure that websites can be used by everyone, including users of screen readers and other aid devices. But the standards also ensure a better visibility in search engines. The whole outcome of the report is displayed on www.validerat.se and the result is updated continuously. 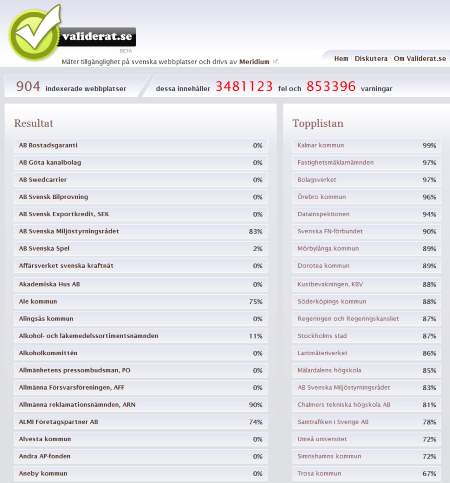 Our report shows that there are a number of authorities successfully working actively with the accessibility on their Web sites. Thus we have chosen to present a top-20 list with twenty successful Web sites hoping to inspire others. However looking at the result it is obvious that most authorities will not have a chance to meet the EU objectives by next year; 65 percent of the measured Web sites do not have a single page that validates.

Validerat.se has even found Web sites where only the front page has been validated in a sufficient manner, but where the remaining of the Web sites has major inadequacies. The result being that they have had fair results in previous reports made by the Swedish authority Verva, despite that the Web site has not been at all accessible.

We believe that the numbers are so poor partly because there is little knowledge of accessibility and Web standards, but also because a lot of people believe that accessible web sites has to be boring which is not true at all. Very few of the top rated Web sites in the report is boring. The important thing when trying to create an accessible Web site is that accessibility is considered in the entire process – from choosing CMS and development partner to help editors avoid errors when creating content.

Validerat.se has so far been launched in a beta version and is validating the technical code on 100 pages on each measured Web site, unlike the now abolished authority Verva’s previous reports in Sweden, where only the front page was verified. Gradually more parameters will be measured at the monitored sites. The 904 measured Web sites so far are authorities, public corporations and certain organizations.

The percentage indicates the proportion of error-free pages.

The report is based on the following:

Each Web site has had up to 100 pages checked by the validator of the international organization W3C. To appear on the top-20 list the Web site must use a strict document type and must not use frames. To view the entire report, please visit www.validerat.se