On any project, the concept of identity can be one very hot potato. Who needs to access the system? How do you know who they are? How do you know what they can do? For greenfield sites, you can often use the standard ASP.Net Identity SQL-stored user management to authenticate and authorise users and keep everything within the application itself. However, if you're working with existing sites or larger enterprises, it's highly unlikely that the standard OOTB user management will be enough and you'll probably need to connect to something external.

Ideally, projects that required an external identity management system would use a lovely, rich SSO provider like Auth0 or Okta. Unfortunately, that's not a luxury that we always have available. In the case of corporates, it's highly likely they are still running on-premise Active Directory and authenticating with vanilla LDAP-based AD. In that case, you might find it easiest just to use the OOTB membership provider for Active Directory. If you're running in the Episerver DXC Cloud Service that would really suck though, and a VPN would be needed to tunnel to the on-premise AD (along with all the paperwork that would bring).

This is where both ADFS and Azure AD come in. Before going further, I should probably explain what they both are, what the difference is and where the overlap is. ADFS is a Secure Token Service (STS). This means that it simply a way of serving tokens to identified users. It can't exist on it's own, but uses other systems to authenticate the users against some identity management system (such as Active Directory). Azure AD is an entire identity and access management system (IdAM) that includes a STS. In this sense it's more 'standalone' than ADFS. The difference is therefore that ADFS is a highly flexible STS designed to be customised and backed by full AD, whereas Azure AD is a cloud-based solution that is somewhat more limited on the STS part than ADFS but provides many efficiencies by being a 'one stop shop'.

The commonality between them is that both ADFS and Azure AD support integration via a standard called WS-Federation. This means that using WS-Federation I can request that ADFS/Azure AD authenticates me and issues me a token. From my application's perspective, I don't really care about the IdAM that is 'backing' the STS. I just care that I can ask for a token, something authenticates me and then I get issued a token.

I thought you said it was a QuickStart?

Okay, I'll get to some steps now. I just needed to cover the intro so we understood what we were doing and why! In this QuickStart, I'm going to use Azure AD as my STS. As stated before, the approach to ADFS and Azure AD is nearly identical as far as my application is concerned because the bit we talk to is just a WS-Federation compliant STS, however by using Azure AD it's going to be much easier (and cheaper!) to set up. Setting up ADFS is rather tedious (you require Active Directory domain controllers, ADFS servers, ADFS Web Application or 'WAP' servers and a pile of configuration) and I wouldn't go there unless you need to.

To start, let's set up our Episerver site. Simply create an Alloy MVC site using Episerver's Visual Studio extension. It's a good idea to spin it up and create a username and password, just in case you need to troubleshoot later. If you open up the code then you'll find that Startup.cs contains code to talk to the built-in user and role managers. We'll replace those later.

Now we need to set up our Azure AD. Log onto the Azure Portal and select the 'Azure Active Directory' option on the left-hand navigation. You should have one already provisioned, even if you're logging in with a Hotmail account or similar. In that case, it will be an Azure AD with just you in it. In order to be able to integrate with Azure AD, we need to create an application. This is effectively the 'vehicle' that we use to communicate with the STS and obtain tokens. To create this, do the following:

By this point you should have a screen that looks something like this:

Our application is now created, but we need to configure a few settings on it. Click the 'Settings' option and set the following:

Quick gotcha... if you've left the screens and go back to 'App registrations' you probably won't see the app you created. That's because you need to change the filter from 'my apps' to 'all apps':

Of the three settings we just changed, the third one (permissions) isn't actually necessary for authentication. We can log on users fine without it. But if we want to authorise them to do things, like log on to Edit mode, then we need to assign them to roles. For this, we need to allow access for the application to be able to read roles from Azure AD. There are two kinds of role we could read: Azure AD groups or Role Based Access Control (RBAC). The first is the more traditional AD-like groups. However, I've found it much harder to get these as role claims through to our website. The permissions and mechanisms for pulling Azure AD groups through as applications roles are not trivial. The simpler option is to use RBAC. In this case, the roles are held within the application itself. Permissions and mechanism becomes much simpler. Let's set up a RBAC group for 'WebAdmins' and add our user to it now.

We have now added the user(s) into that RBAC group, and when they log on, they will get the role claim sent to your website to be used as an Episerver role. We're nearly there on the Azure AD side of things, there is just one more security check we need to do. The permissions we added require an administrator to confirm them:

The last thing we want to do is get our Azure AD endpoint as we'll be using this just now. You can find this here:

Now we are ready to flip the code over in our website to use Azure AD. To to the project in Visual Studio and do the following:

It's that easy! When you now go to your site /episerver/cms, you should get taken to Azure AD for authentication, something like this: 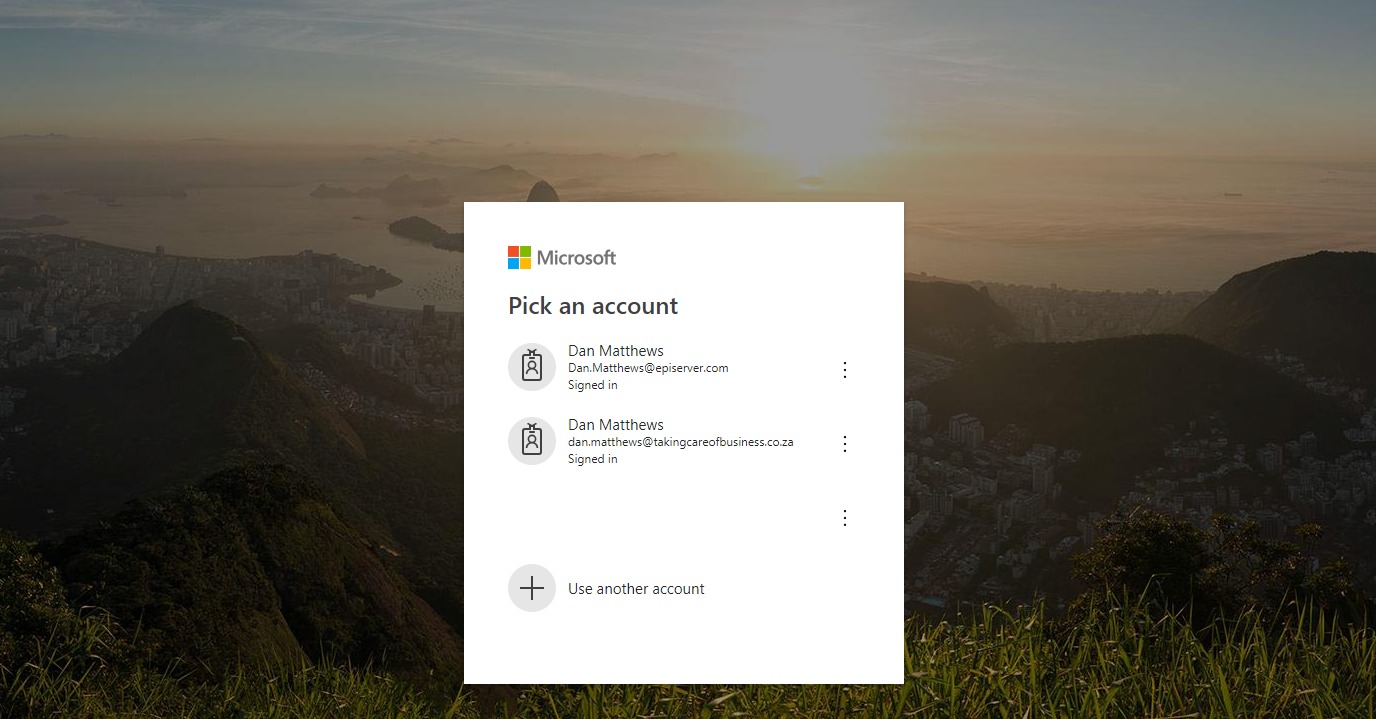 Pick your account that you assigned the WebAdmins group to, and you should be able to get into the Episerver CMS edit mode successfully!

In this QuickStart we walked through setting up a new application in Azure AD, configuring it and then switching our Alloy site to use that application configuration and authenticate to Azure AD. The setup you've gone through here supports SSL and multi-site, both of which you can set up on IIS Express (maybe the subject of another post?!).

I hope this helps you get started using WS-Federation and Episerver. Some of the screens and things may change over time, so I don't know how long this QuickStart will be perfectly valid, but the concepts inside should be around for some time to come.

For the record - I know that WS-Federation isn't the only option available for integration. For example, you could use Open ID Connect. However, in practice I've found that many corporates, especially those on ADFS, want to use WS-Federation rather than go the Open ID Connect route. The approach outlined here follows the same basic principles as any authentication flow, it's just that with Open ID Connect there would be a bit more 'plumbing' in terms of endpoints etc.

Super clear, and detailed enough so that even I can follow it!

Great stuff - you are the king of federated Auth*ation

Good one! I try to say as often as possible: If you're putting user, password and role management in the Epi database you're doing it wrong.

A note on WS-Federation is that you will get problems with the Cloudflare setup in DXC Service. The redirect will get caught as suspicious traffic and a Cloudflare screen with a CAPTCHA prompt will show. With OIDC, no markup (XML/HTML) is posted back to the site so it doesn't trigger that OWASP rule in the Cloudflare WAF.

Great write up instructions are super simple and should make implementing this a breeze.

Currently I have also set up a connection from EPiServer to an ADFS server (hosted on premise) using WS-Federation.
Locally this works now, but later on I need to deploy it to the DXC.

@Johan Kronberg can you please let us know what Cloudflare rule must be added by EPiServer support to bypass the Cloudflare captcha?

@Ger Groot We had the ruled turned off from when the rule started to trigger to deciding on and completing a switch to OIDC. But it seemed like they were bad at handling these custom changes to the rule came back on a couple of times during that time. And through the whole process it was very fuzzy what actual was in place and what types of changes were possible.

The option to get them to turn WAF off for your redirectUri is of course bad since it's the most important endpoint on the site security wise. But having the signin flow trigger a Cloudflare screen everytime is of course not acceptable either.
It's was a bit weird that using the CAPTCHA then actually posted the whole supposedly "suspicious" chunk down to the origin anyway.

Another note is to always install and activate https://github.com/Sustainsys/owin-cookie-saver with any type of Owin security in place.

Thanks Dan, This is Great

Thanks Dan, This is Great

I am trying with Okta WS-Fed with Episerver(/federated-security/), Am able to login but when I do logout from CMS, it just redirecting to Okta site and not getting Signout from both Okta and CMS. What could be the issue?