In the previous post we looked at why targeting multiple environments and machines can be a problem, and our approach to solving this problem. In this post I will walk you through our solution from a more technical perspective.

Our solution to this problem is achieved primarily by the use of NAnt 1 and some extensions we have built on top of that. Our setup allows us to support different configurations on not only a per-environment basis, but also on a per-machine basis in each environment. Our solution is stand-alone, not requiring any external references, and it is easy to setup. Best of all? We are offering it to you, free of charge! A download link for an example project can be found at the bottom.

Let us dive right into it and take a look at an example project setup, see the figure below: 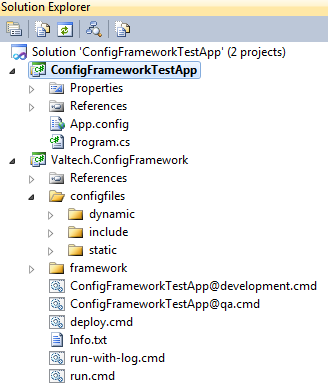 The interesting bit here is the “Valtech.ConfigFramework” project. The project is divided into a number of folders:

When building the project, the include files are merged with the dynamic files, and output along with any static files to the output folder( s). The actual folder structure looks like this: 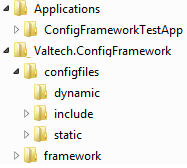 In the previous solution overview, I showed an application alongside the configuration framework. In the figure below, two folders “License” and “Log” have been added to the application, and the “configfiles/dynamic” folder and “configfiles/static” folder for the Valtech.ConfigFramework project have both been expanded: 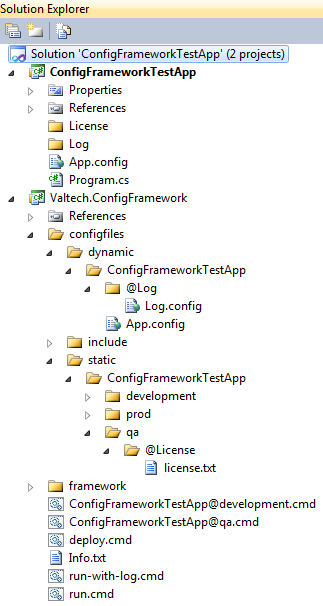 Below the “configfiles/static/ConfigFrameworkTestapp” folder there are three folders: development, prod and qa. These folders each act as containers for files specific to an environment. In the figure above, the qa-environment folder is expanded, and below this folder is a folder named @License containing a license file specific to this environment.

So in this case the following files are copied from the ConfigFramework project to the application:

The files from the dynamic folder, are altered based on configuration properties from the “configfiles/include” folder (more on this below) whereas the static files are simply copied to the application.

In this example we are only modifying and copying .xml and .txt files, but the ConfigFramework is not restricted to working with any specific file types, so you could for example add external .dll files as static files to be copied. 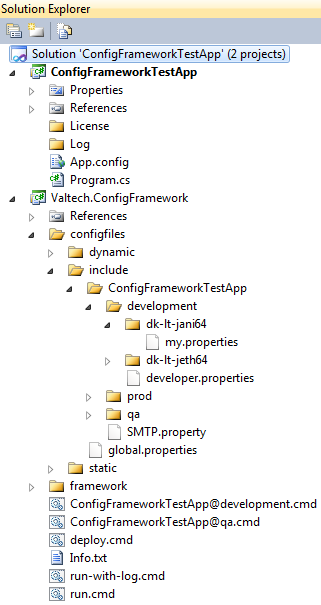 As you can see, the “configfiles/include” folder is expanded, once again revealing the application “ConfigFrameworkTestApp” as the top-level folder. Below that there are a number of folders: development, prod and qa, each used for targeting a specific environment. However, as evident below the “configfiles/include/ConfigFrameworkTestApp/development” folder (which holds all properties for configuring the application in the development environment), there are two more folders: dk-lt-jani64 and dk-lt-jeth64. These are both actual machine names, and any properties defined for a machine will automagically override properties defined on the environment (i.e. development in this case) level.

Sounds confusing? Hopefully not so much if we look at an example. Below are a few lines from the App.config of the application:

And next are the contents of the configfiles\include\ConfigFrameworkTestApp\development\developer.properties file in the Valtech.ConfigFramework project:

Notice the property with the name “HelloWorld”. When you build the Valtech.ConfigFramework, the value of this property will automatically replace the ${HelloWorld} token in any files under the configfiles\dynamic folder. Now, what if my personal HelloWorld value differ from the general development settings? Answer: I simply override the property in my machine specific developer.properties file – i.e. configfiles\include\ConfigFrameworkTestApp\development\dk-lt-jani64\my.properties:

But the ConfigFramework is not restricted to simply having key-value pairs. Supposing you only want to include parts of a Web.config for specific build configurations, and not others, you can do that too. For example, if I include the following line in my App.config file:

The ConfigFramework will look for a SMTP.property file under “configfiles/include”, and replace the line above with the contents of the file, e.g.:

Putting it all together

So how does all this work? The keen eyed reader may have noticed a number of .cmd files in the figures above, and this is where all the action is happening. Well, that and solution configurations in Visual Studio. 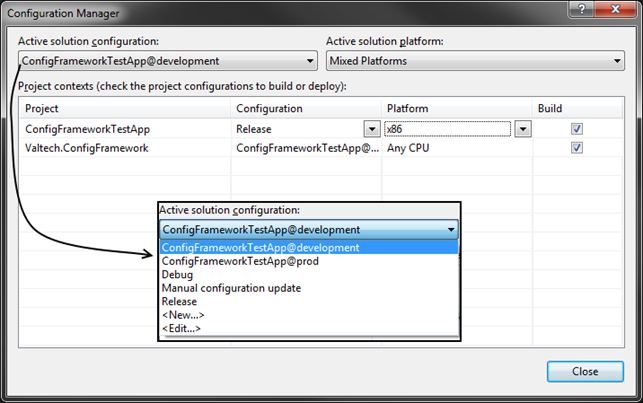 This solution, allow us to automatically build configurations for any number of environments and machines. It does require some initial setup, but once that bit is over, you don’t ever have to worry about manually merging config files from one environment with another. Secondly, if you pair this approach with a continuous integration package (e.g. TeamCity) you can automate the entire process of building and deploying your applications across multiple environments.

Now, for what you’ve all been scrolling to:

Download example project
Make sure to replace the folder names “your-machine-hostname” with the name of your machine and try to play around with the different build configurations:

The first two work as explained above, where as the third “Manual configuration update” bypasses the configuration builder which is useful if you would like to build your application without also building all configuration files.

1. NAnt is a (free) .NET build tool based on Apache Ant, designed for developing software across multiple platforms. There are tons of examples on how to use NAnt on the projects homepage, so if you are new to NAnt I’d advise you to take a look at the project’s homepage here: http://nant.sourceforge.net/.