Last Friday I saw a request on the forums if it was possible to change the order of the media and the shared blocks components so that the media component would be the one shown by default. I responded that I did not know a god way but since there seems to be several people wanting this I did a quick investigation if there was a decent ways to do this. I had three ideas to investigate:

How a view is defined and set up

When a view is created for the EPiServer UI, there are several steps and extension points. Basically the view itself defines the main structure of the view and the possible plug-in areas. If we look at the home view of CMS it looks something like this:

And after the view system has been created and components have been plugged in a default installation will look something like this:

As a partner developer, you would usually only care about the ComponentDefinition and not the actual components created since this is mostly a bearer of data for the current view.

If you want to know more how the view is set up I suggest reading the following SDK article: http://sdkbeta.episerver.com/SDK-html-Container/?path=/SdkDocuments/EPiServerFramework/7/Knowledge%20Base/Developer%20Guide/User%20Interface/View%20Composition/View%20Composition.htm&vppRoot=/SdkDocuments//EPiServerFramework/7/Knowledge%20Base/Developer%20Guide/

Changing the sort order for the File Manager component definition

The first idea I had was to get hold of the singleton instance of the File Manager Component Definition in an initialization module and just change the sort order of the instance. The code I tried looks like this:

Note: I’m using "EPiServer.Cms.Shell.UI.Components.MediaComponent" instead of typeof(MediaComponent).FullName to not have to take a dependency on the CMS UI add-on. This is not needed in EPiServer 7.6 and above since it's been moved to the bin folder.

so we have to move to the next potential solution.

The next idea I had was to replace the media component by registering a custom component in the IOC container (http://sdkbeta.episerver.com/SDK-html-Container/?path=/SdkDocuments/EPiServerFramework/7/Knowledge%20Base/Developer%20Guide/User%20Interface/View%20Composition/How%20To/Replace%20a%20component%20globally.htm&vppRoot=/SdkDocuments//EPiServerFramework/7/Knowledge%20Base/Developer%20Guide/).

The idea is that whenever a component should be created, it’s possible to let the IOC container create an instance of custom type registered in the container. The code to do this would look something like this:

Though doable I noticed that I have to create my custom component without any reference to the original component definition. This would simply cause too much copy and paste of settings to make a copy of the standard media component and with the risc of breaking when upgrading EPiServer. So I decided to move on to the third option…

Registering an IViewTransformer to move the Media Component

The idea here is to modify the sort order of the file manager component before the sort component transformer does the actual sorting. The code looks as follows:

Actually, on this third attempt we have a working solution. 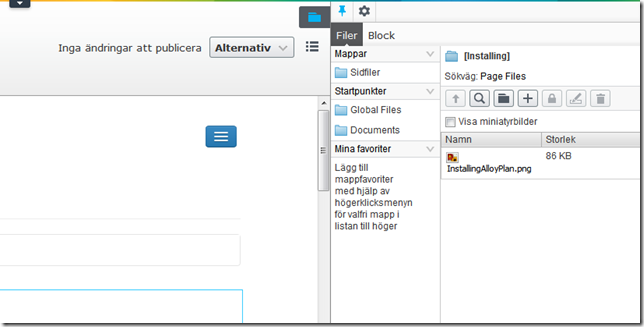 There is one small caveat though that you should know about:

If the user has already personalized the Assets Pane, the sorting will be overridden by the personalization since this is applied after the sorting. This shouldn’t be a real problem as long as you implement the sorting before the users start using the system. If you add this on a system in use you might want to clear your views as described here: http://world.episerver.com/Blogs/Linus-Ekstrom/Dates/2013/1/Resetting-your-EPiServer-views/

Brilliant! Thank you very much!

Thanks for the quick response Linus! Excellent walkthrough of the alternatives.

Just what I needed, works great!

I read your couple of blog about custom component and content provider.

I am using latest version of CMS and trying to plug component with content provider at top of asset pane next to media and blocks tab but even I set DefaultAssetGroup, my component adding at bottom of asset pane.

I am actually just about to resurect a project that I worked on over two years ago that has some parts implementing custom content and views. I will blog about this shortly, but for now: please have a look at the code in the Github repo to see if it helps you: https://github.com/LinusEkstrom/EpiserverExtensions.Settings