Limiting total items in a content area while supporting personalisation

As anyone who’s spoken to me at any length about Episerver can confirm, I’m something of a fan of Episerver’s inbuilt visitor group personalisation capabilities. It’s easy to use and, done right, can add a load of value for next to no effort but all too often I see it forgotten about during builds. The most common occurrence of this that I see is the use of a ContentArea’s Items collection rather than FilteredItems but I was reminded of another by Aniket’s recent(ish) blog post.

It’s a technique I’ve seen both in various blog posts and out in the wild being used on sites but, while it does exactly as it claims (sets a maximum number of items you’re allowed to add to a content area), it’s probably not what you need. Why? Take a look… 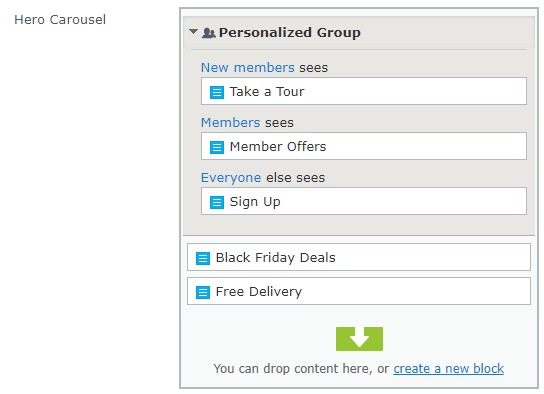 In this example we’ve got a content area for a hero carousel which can display no more than 3 blocks. To enforce this, I’ve added the validation attribute described in the posts linked above to limit the maximum number of items in the content area to 3. I’ve then set up some blocks so that only 3 will display. All good?

Well, not really. Even though only 3 items will display, the validation attribute will throw a validation error because it doesn’t consider personalisation. If we remove items until it stops throwing an error, in this instance we’d end up with only a single item being displayed on the site. 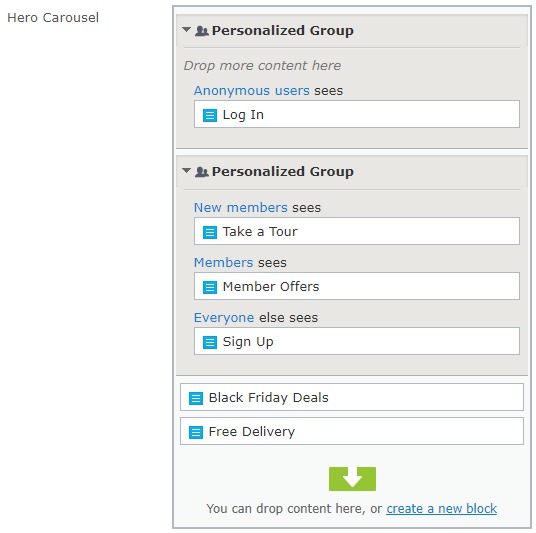 As the editor will always be logged in and the validation will run in the context of the editor, the first item would be filtered out and so, even though we could quite feasibly return 4 items from the FilteredItems collection for a user viewing the site, the validation will let that through.

Putting it all together, we get this:

nais, I would also add optional boolean to control whether personalized content should be counted in as well. just for flexibility

Hi Valdis. Thanks for the suggestion. It's simple enough to add that option (see below) but I'm not entirely sure of the use cases. I can't think of a realistic scenario where you'd want to restrict the number of items in a ContentArea but you wouldn't want to take personalisation into account.

This is cool - I hadn't really considered this edge case but I can see that it should be properly considered!