New features added to Episerver from updates 90 to 99 include the following:

Discounts are color-coded to distinguish between the components. A gray-colored product or category indicates that a customer must purchase the item to activate a discount. Discounted products are marked in blue and the discount amount or percentage is green, as shown in the following image.

New discount type: Buy one or more items and get a discount off another item

This discount type lets you define a set of items, using categories or individual catalog items (or both), and then define a percentage or fixed amount off another set of items. For example, if a customer buys any item from the jeans section and a sweatshirt, she gets a 50% discount off a sequined blouse. 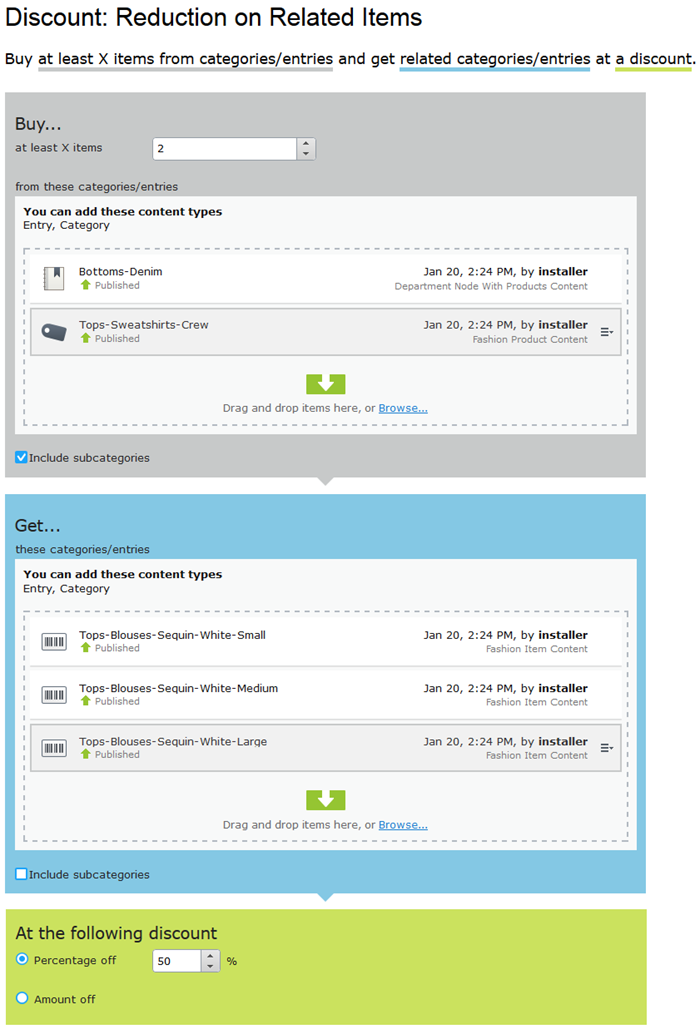 A Discount Priorities view lets you set the priority for discounts so that Episerver applies the customer's discounts in priority order. Discounts with higher priority are applied first. Excluded or inactive discounts are not applied.

This add-on provides a block-based approach to creating web forms, a key element of many websites to collect information. Some examples of forms are Contact us, Sign up for e-mail, Sign up for an event, and Apply for a job. You can, for example, create a multi-page job application form or use several simple forms to build a progressive profile of a site visitor for marketing purposes.

Example of step 1 of a multi-step job application form:

See Episerver Forms in the Episerver User Guide for information and examples about creating forms on your website.

The new feature adds a new API for explicit registration for services into the container. See the Dependency injection topic in the CMS Developer Guide for information.

You can now configure Episerver CMS to automatically create the database schema during site initialization if the current database is missing a CMS schema. See Installing database schema in the CMS Developer Guide.

The Episerver Forms add-on is now officially released and no longer a Beta version.

The following upgraded add-ons are compatible with CMS 9:

Go to top of page