Today I'm happy to announce the availability of ImageVault 4.4 from EPiServer partner Meriworks. The update brings a new, considerably simplified installation process and at the same time makes ImageVault compatible with the latest version of EPiServer CMS.

It is of course essential to ensure that ImageVault is up to date with the latest versions of EPiServer CMS, hence this release will bring ImageVault to the current version of EPiServer. Besides compatibility with the current EPiServer version, improvements have been made regarding how the NuGet packages and the Add-On are structured, to make it easier for developers and to comply with how EPiServer intend these to be used. As they say, "You never get a second chance to make a first impression", and one of the first things a developer is faced with dealing with any software is usually the installation process. In this case we can acknowledge that the installation and configuration of previous ImageVault installations have not been as easy and inviting as it should.

Before diving in to the changes made in the current version let's take a moment to look back at the road leading up to the current situation. Looking back at the vision for ImageVault 4 a few years ago, a flexible and seamless single sign on solution was one important factor. Since a distributed solution was one important part of the vision, an authentication method that could match that ambition was required. Federated Authentication using SAML seemed like a suitable solution. At the time Federated Authentication seemed to gain some traction, and the prediction was that it would be a commonly used technology in the coming years. Obviously this prediction didn't turn out to be true, at least not outside of the banking sector, although banks are working with another kind of assets.

In hindsight the chosen solution worked as expected but was way too complex in regards to installation and configuration. Hence decision was made to remove this part and replace it with a more main stream and battle proven authentication solution. The solution was to fall back on standard Forms/Windows authentication for user authentication and user management, and OAuth for the API.

The main advantages of this redesign is a simpler architecture, a vastly simplified installation and usage of a technology well-known by our partners. Besides easier installation it also made it possible to remove a lot of configuration files, certificates and dependencies that could cause problems for developers. A lot of effort was also put into making these changes without enforcing a lot of changes for developers. In fact, no code using the standard API needs to be rewritten at all, a simple rebuild of the project is all it takes.

To make it easier for development teams working with a common site it is now also possible to set up the local environment using nuget and Add-on store toward an existing ImageVault. This will also make it easier to work with version control of the setup. 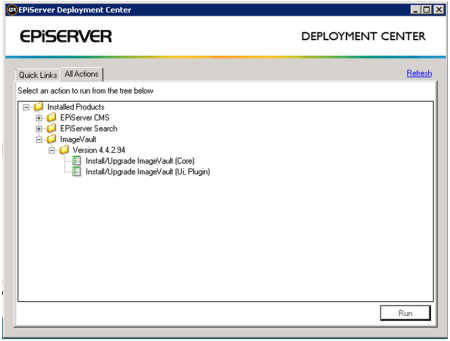 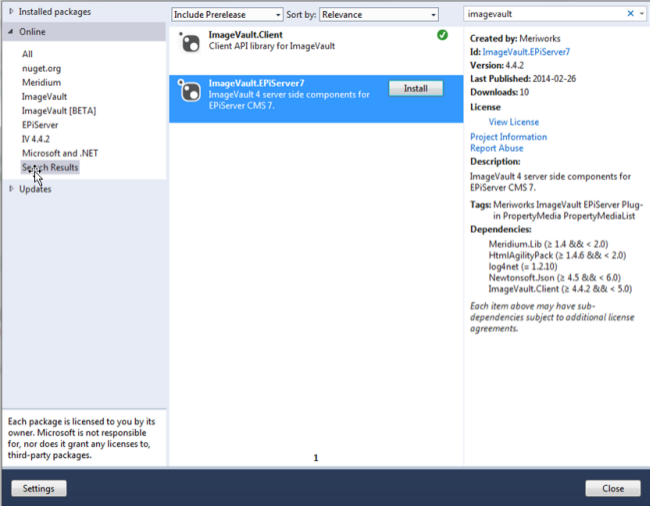 Even though this release has a heavy technology focus, there are some changes that will benefit end-users as well. The most important one being support for EPS and PDF format, which ImageVault didn't support (preview or convert) in older versions. 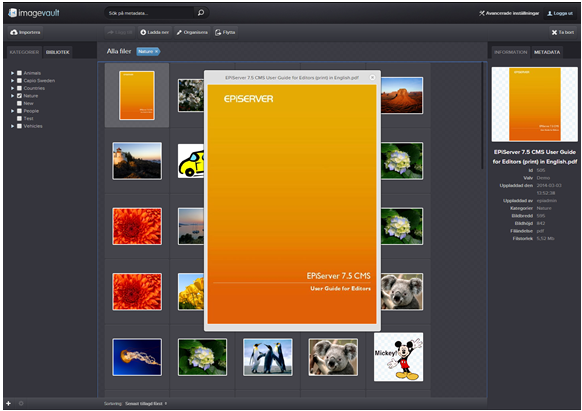 This support is built as plugin using the API and Ghostscript, which is one of the most frequently used software for rendering these formats. There are also a few minor updates regarding available metadata, search, and performance improvements and of course corrected bugs.

Upcoming releases will have a greater end-user focus, putting more efforts into requested features in the product.

Great! Will the previously released migration tool (3->4) work with an ImageVault 4.4 installation as target?

A new version of the migration tool will be available within the next few days. Please contact Meriworks should you need access to the updated version immediately.

When I navigate to "Episerver Add-Ons", I don't see ImageVault4 as an add-on on the list.