The great EPiServer Geocache Race ‘09 has started! You might be wondering what on earth a Geocache is and what it’s got to do with racing. Or EPiServer, for that matter…

Geocaching is a worldwide hobby which is like a high-tech treasure hunt. There are Geocaches all over the world which can be found by following clues and GPS co-ordinates on Geocaching websites. A Geocache itself usually contains nothing of much monetary value but a lot of fun value in finding it :)

There are many sorts of Geocache but the ‘traditional’ Geocache consists of some sort of container hidden from public view. One of the things you will often find inside is a ‘travel bug’ or a ‘geocoin’. These are small trinkets that have a unique ID attached to or stamped on them. The idea is that someone who finds one of these trinkets takes the item and moves it to another Geocache, using the unique ID on it to record the move on the Geocaching website. In this way, unique trackable items can make their way from Geocache to Geocache all over the world.

Usually a travel bug or geocoin will wander fairly randomly, but if you leave instructions with it about where you want it to go, then – with a bit of time and luck – you may be able to watch it get to a predetermined destination.

And this is where the EPiServer Geocache Race comes in!

Christopher Osborne, one of my colleagues here at EPiServer South Africa, is very keen on Geocaching and decided to spice things up a little with a race. He registered a new Travel Bug and last weekend we took a little walk up Lions Head, a hill in Cape Town which is part of the Table Mountain park. Near the summit there is a Geocache and Christopher left a Travel Bug there. 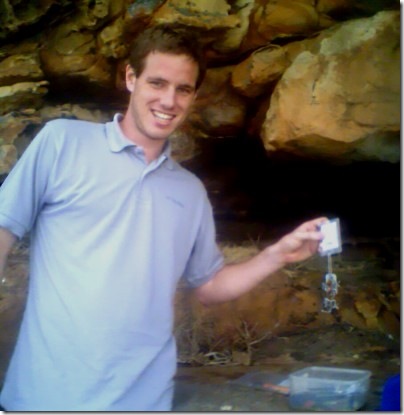 At the same time, about six and a half thousand miles away near Uppsala, another EPiServer colleague from the Sweden office was releasing their Travel Bug into the wild too. Helen Hopkinson Abar is someone else who has discovered Geocaching and she is the other half of the great race!

The rules are as follows. The bugs must be:

If you would like to track the progress of these intrepid explorers as they migrate hemispheres, then you can track Karma the Chameleon (Christopher’s bug) and ‘Erik and Molly’ (Helen’s bug) on the Geocaching website.

May the best bug win!