The current version of the EPiServer Deployment Center has a bug which only shows itself on Windows 7 SP1 and Windows Server 2008 R2 SP1. 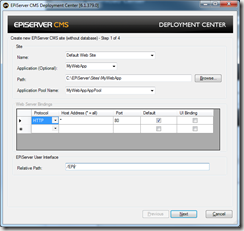 When you click on the Next button you will probably find that Deployment Center crashes. This is caused by some sloppy coding by us which was tolerated on previous versions of Windows but alas no more.

To fix this problem you should download CMS 6 R2 from EPiServer World (this should be available from Monday 4th April 2011) and install the EPiServerShared.msi. This will install the latest Deployment Center and shared EPiServer CMS Windows Services which are all backwards compatible with previous versions of CMS.