TL;DR: Head over to https://github.com/episerver/Foundation-spa-react and get the initial alpha release of a React frontend for Episerver CMS developed within the Episerver Pre-sales team. With the invitation to our community to work with us on making this a high quality reference site.

In my role as Solution Architect I've the privilege to work both with prospects as well as with our partners. A topic that did arise during many of these meetings is headless. And even though I personally do not believe headless to be the be-all-end-all for the delivery of customer experience, I do see the benefit of the technology stack used to deliver "headless". This put me on a quest to implement a React based SPA on top of Episerver Foundation. Today we're releasing the first version of this effort as an open source project on GitHub.

So what are we releasing:

The React Based Frontend:

The frontend is both opinionated (e.g. it has been built enforcing certain practices) as well as convention based (e.g. there are certain patterns you cannot break). By adhering to these you'll get most of the benefits from using this frontend. If you want to break these practices and patterns, you can still use (part of) the library which is included. It just means that more of the boilerplate has to be written by you. 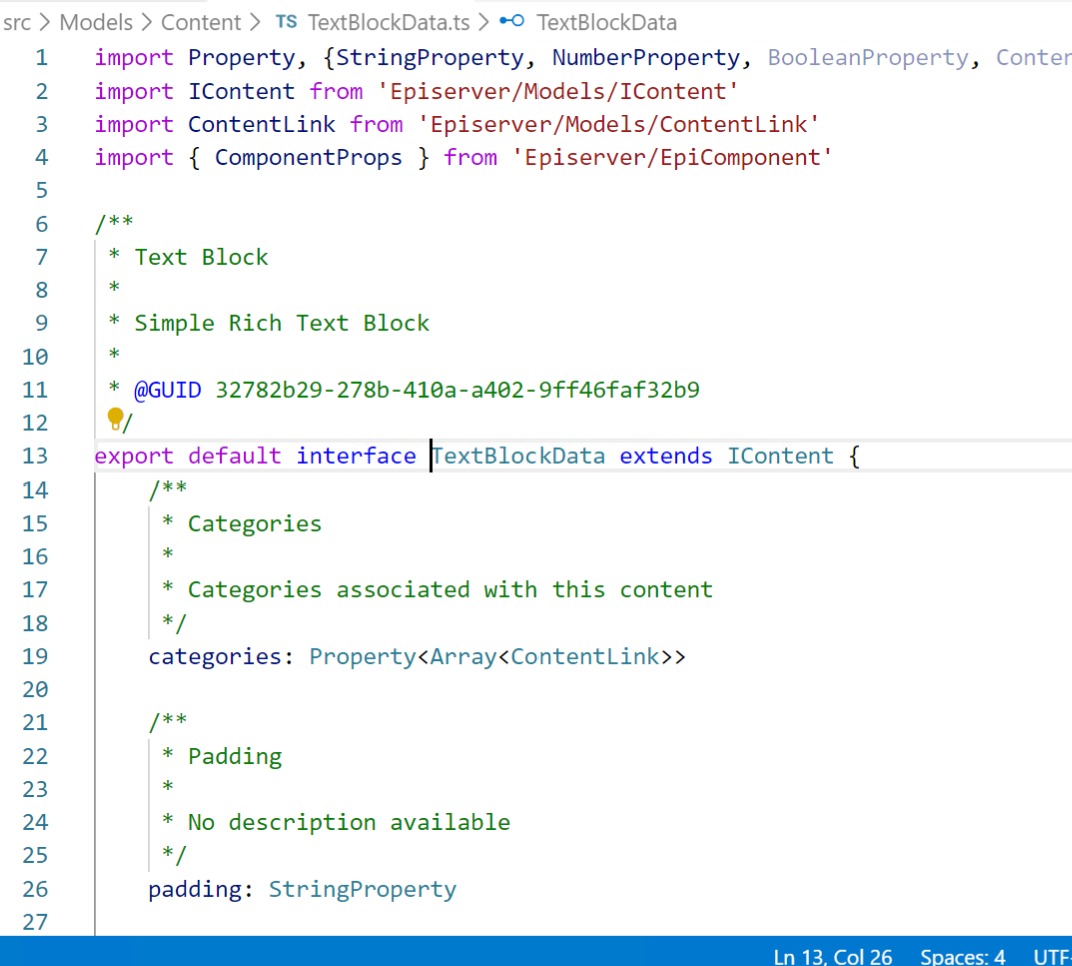 An auto-generated IContent model, to ensure all data-models are identical to those within Episerver.

What's still on my wish-/to-do list (in no particular order):

Like any first version / alpha release there's a lot still on my whish-list, ranging from feature enhancements to structural enhancement.

*) This will most likely be done after our upcoming .Net Core release.

Anatomy of the frontend: 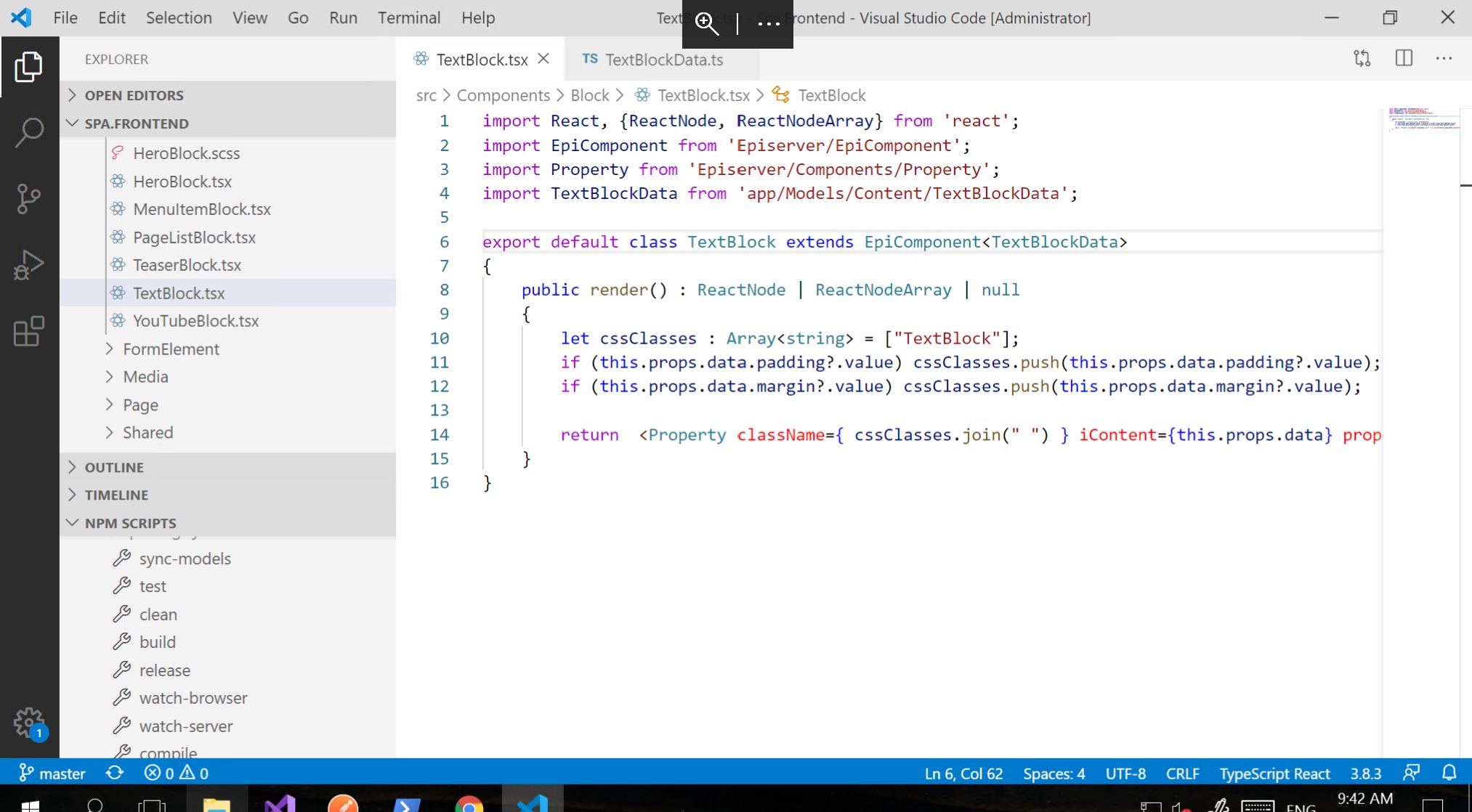 First things first: the language of choice. I've chosen to go with TypeScript, mostly because I like strongly typed languages and the ability to catch some of the errors already during build-time. For those having no TypeScript experience and only have done JavaScript, you'll catch on quickly.

The pre-configured environment is assuming that you'll deploy into CCDXP and thus requires the full Episerver CMS to be running on the development machine to keep the coupling in place. With the appropriate CORS setup on the Episerver side, the frontend can be deployed independently of Episerver. Personally when working on this, I use two IDE's, Visual Studio for the .Net part and Visual Studio Code for the Frontend.

The frontend is located within src/Spa.Frontend

At the server side

At the server side, there're a number of add-ons to Episerver to make the SPA work:

The code of the Foundation React SPA can be found as open source project at: https://github.com/episerver/Foundation-spa-react. We're inviting you to collaborate with us on improving the solution by raising tickets, sending pull-requests and providing general feedback.

Wow what a long blog post with detailed information. Thanks for sharing Remko!

Was there a specific reason to go with React?

Prior to this project there was the Music Festival template site (https://github.com/episerver/musicfestival-vue-template) which is using Vue.

I am specifically curious if there are any benefits in using React over Vue in regards to the server side rendering?

The main reason for me to choose React is the amount of request for React I experience when talking with customers, prospects and partners. So there's no technical reasoning behind this decision.

With regards to Server Side Rendering - React has a number of libraries (both core and community) that make server side rendering pretty easy to implement (specifically: ReactDOM, ReactDOMServer & Helmet). I did not investigate if there are equivalents to these libraries for Vue due to the early decision to go with React - so I'm not in position to compare the two on this specific area.

This is awesome. Are there any plans to build something like this for Angular as well?

At the moment there're no plans to create an Angular version of this frontend. However, if you would like to take on this challenge, the starting point is the lib/episerver folder. This contains all logic and standard components that would need to be changed to support Angular.

If you like to contribute, there's always the option to split the lib/episerver into a generic part and a library/framework binding. That's the route I'd take to share as much code/logic between library/framwork versions as possible.

Some people live and breath 'best practice' development. I am not one of them. Risk is, in-experienced developers (or sometimes experienced) might...