I have a problem where I have created a custom "SpendAmountGetDiscount" promotion with some extra conditions, but have an issue where CampaignA and CampaignB are both
applied, despite being added to the "cannot be combined with.."-list. Below is a simplification of my issue:

And despite being disabled for combination, the user gets a 3000kr discount. I'm thinking there is something i have missed in my custom campaign, but can not find where.

I'm assuming it is order level promotions. Just by looking at your problem, I don't know exactly where the issue is. But I can explain how the exclusions work in more detail, so maybe you can find the issue. Basically answering your first question.

So for each promotion that is eligible for evaluation, it will check:

Hope this clarified a bit on how it works. There are more scenarios where a promotion would be excluded but they don't feel relevant.

If my assumption is wrong, that you are indeed working with entry level discounts (i.e. SpendAmountGetItemDiscount) AND you have your exclusion level (a promotion engine setting) set to Unit, then you can get the 1000kr discount on 1 lineitem and the 2000kr discount on another lineitem, even if they are excluded from eachother. Because the exclusion will then operate on item level rather than the whole order.

It is actually an entry level discount i am having issues with. Let me show you some pictures showing my problem and why i am confused.

This line returns two RewardDescriptions. My two promotions that should not be combined, on one lineitem. Below is the image showing the exclusion of both promotions.

The custom promotion logic is as follows:

So i do have some custom conditions in my promotion.

That does indeed look fishy.

Does it do the same if you instead of running

It should be the same though... What is the type of `PromotionService`, is it something custom or is it simply the built in `PromotionEngine`?

the promotionService is just the IPromotionEngine injected like this, so nothing custom. 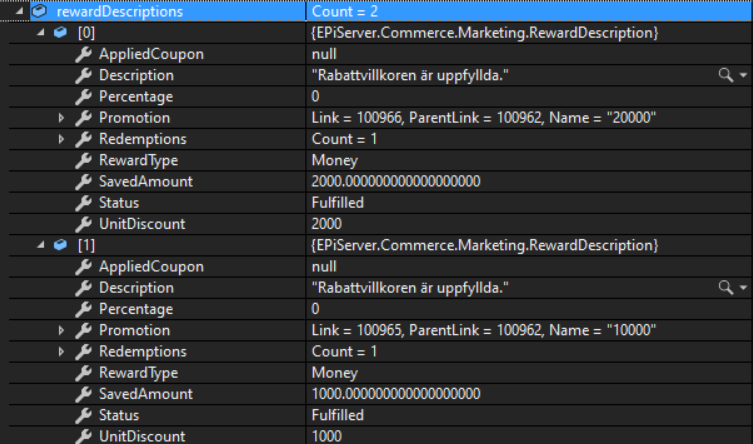 And if you look in the .Promotion.ExcludedItems for both these rewards, you still see that they both exclude All?

Yes, they both have one item excluded, which im guessing is the "All" node.

I'm grasping at straws here... But double check that 6329 is the same as SalesCampaignFolder.GetCampaignRoot(). Also maybe try with having them specifically exclude eachother as well? In the prioritization and exclusions view, have 20000 exclude 10000 and vice versa.

Yeah, I realize i'm not giving you much to go on. Changing the exclusion to specificly exlude each other did no difference. I can also see that the correct ID is excluded for each promotion, despite that, two rewardDescriptions are returned when i run ApplyDiscounts()/Run()