News regarding License and Site handling in CMS6.

In admin mode there is a new option “Site Information” as seen below:

From the list you might already see a new feature, namely that it is possible to have a separate license file for each site in an enterprise scenario.

If you select a site you will be directed to the details page for that site as seen below: 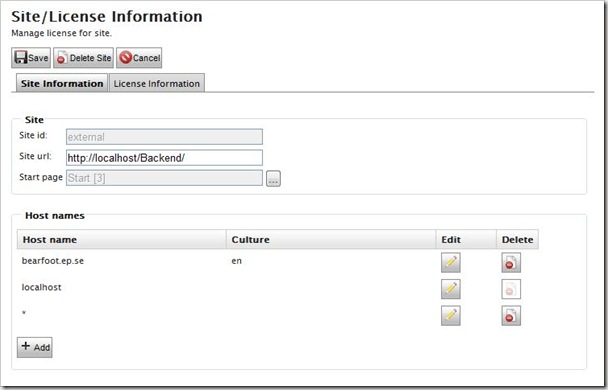 On the “Site Information” tab it is possible to manage which hostnames, ports (and optionally languages) that should be associated with the site. In CMS5 this had to be done directly in the web.config file.

The “License Information” tab lists details about the current license as well as some license management features as seen below: 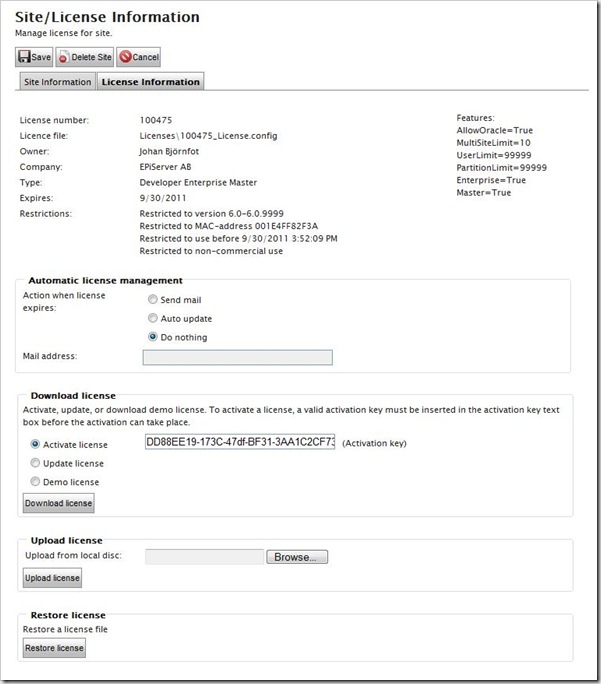 The “Automatic license management” section gives options for what action the system should do when it detects that a license is about to expire (less than five days left). The different options are:

In the “Download license” section there are some features that involve communications with the EPiServer license service. These features are:

The “Upload license” section lets the user upload a license file from disk and update the site to use it. 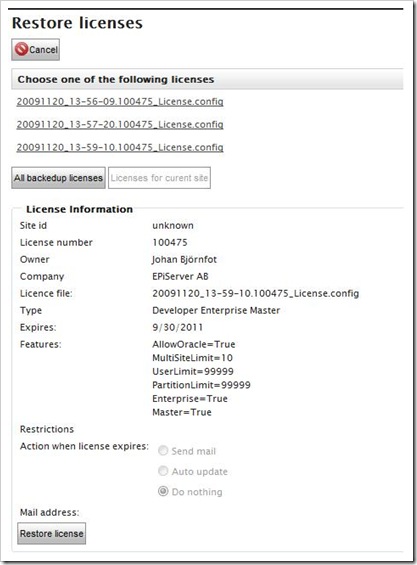 Here you can see all backed up license files. If you click on one of the files you will see details about that license and have the option to restore the license.

Here you can see that the host mapping configuration has been moved from site element in episerver section to siteHostMapping element in episerver.framework section. You can also see that there is a new attribute licenseFilePath on site element that states where the license file associated with the site should be loaded from. The path can be either relative to the site root or an absolute physical path. The system will by default (e.g. when downloading license files) store them in a sub folder to the site called “Licenses”.

Does this mean that we can have a single WebSite in IIS to handle an Enterprise configuration (multiple sites)?
/ Thomas Solbjør

Regarding IIS setup there is no difference from CMS5, that is different sites in enterprise scenarios will still be different IIS sites.

Regarding siteHostMappings, we use standard .NET configSource attribute which only supports relative paths so you can not have episerver.framework.config on a fileshare. So as you point out when working with sitehost mappings in a loadbalanced scenario you need to copy the config changes to the other sites config files. (You can of course use some external file syncronization tool)