Once you install EPiServer CMS 6 is the new editor, TinyMCE (open source) as standard. However, it is entirely possible to still choose the old editor. Having now been working in the new editor a while, I would like to share with you the pros and cons of the new editor from the editor's daily work.

Not dependent on a particular browser

One of the biggest advantages is that you do not rely on Internet Explorer to edit pages. Now you can edit pages in EPiServer CMS as well with Firefox, Safari or Chrome. There is a tremendous lift.

Greater possibilities for adjustment of the various fields

How many of us have not been angry that the old editor, could exist only in one size? How tired we have not been clicking of us apart and when we come together because we want to add / remove a button in the editor all fields on lots of templates?

With the new Tiny, this is only a memory. It is possible to customize each Editor box, so you choose which buttons you have and how large it should be. You can also point to a custom CSS for each box, so it really is a WYSIWYG-esteem. This can also be saved as a global setting so that you can use the same field in multiple templates. This is totally awesome and saves a lot of time. For example, look like below. 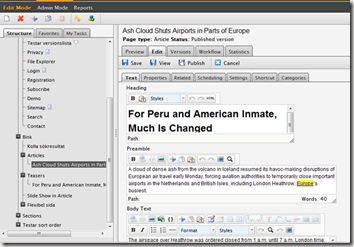 Correct spelling of the old editor had a lot to be desired when it was linked to MS Word. There was particular not to add new words, but to do it in Word. In the new there is no spell at all and one can consider how it can be an advantage. The discovery of the correct spelling was missing was a dyslexic person I look for alternatives. The solution for me was to switch to Firefox. It has a built-in spell check function and it is possible to download the plug-ins for all possible languages. It gives me little red, bumpy dash in just as I am used to.

With Firefox, I have some other limitations, such as drag and drop files into the file manager, so now I work often with multiple browsers at once.

Adding media directly in the editor

I can put media such as Flash and various types of formats. You can easily and smoothly without inserting directly from the file manager.

Resize where I work

The Tiny, you get a little slider in the lower right corner as you can pull in order to reduce or enlarge the box, which you are currently working in. It is a killer feature. The old maximize function, but is also known as Full Screen.

In this editor is it possible to use a lot more buttons. Some of the buttons has been requested before it has been raised, inter alia, to incorporate the symbolic and becomes wet. There are many more to choose from and you can choose where to be and in how many rows and create separation between the keys. It is also still entirely possible to build custom buttons with custom functionality.

The built-in right click menu that I used very frequently is not there. This means that I must move the mouse and click on the buttons above, instead. It works of course, but it is hard to teach an old dog ...

Custom format in a list, common formats in another

In the old editor, we had a convenient list of the formats that we wanted our editors to choose from. We could have as many heading levels as we wanted, and that we could add a custom number format that we are baptized with the desired name. This feature is in TINY but we also get a list of heading levels and another for the custom format. The names that appear in the list of custom names are the technical names has been used for encoding, and that we see all formats even if there is a table format or aspect ratio. Not quite neat and hard to explain to one who is not too familiar with what goes on behind.

In the old editor I paste unformatted text with a simple right click. Now I select a button, which opens a dialogue which I will paste in. I think unnecessarily lengthy. However, I have not really clear to me how that works, too often when I'm lazy and just choosing CTRL + V it will be great, but not always. I wonder how the idea is that you should use the various options to paste?

Can not edit the image directly from the page

Often you find that a picture is too large only when you insert it into the page and possibly also previewed. Then it was smooth that I could directly from the page edit screen and save it as a new image. I have not managed to make it in the new, but I have to open File Manager and edit the picture from there and then link it into the page.

More choice in most dialogues

Most dialogues opening contains a lot more choices. There can be many occasions to be good, especially if you are a relatively sophisticated editor. But if you are not so advanced it makes the system cumbersome and difficult to master. Purely pedagogically, I think it is extremely difficult to teach others what they should focus on, and not.

Sure, I've had a lot opinions about table handling in EPiServer editor over the years, but I think it still is better than the one in the new. I am perhaps a bit tough because I can already EPiServer's so good. You can do the same things, but I think it is more cumbersome in TINY, and there is definitely more difficult to explain to someone not completely familiar with making a html table works.

Which editor should I choose?

Although there are a lot of disadvantages and deterioration of the New editor, so I think after all that the advantages outweigh the disadvantages. Are you new in EPiServer CMS I definitely think that you should use Tiny. Have you worked for a long time in the old and perhaps also some custom plug-ins to the, I think that you should remain in it until the next release comes from EPiServer. Hopefully, most of the drawbacks when away.

This is my very personal views and some of them might be due to a lack of knowledge about how it's supposed to. Know that a lot of functionality became priority to be given in the first iteration. Just keeping my fingers crossed that it will be a priority in the next.