Here is my contribution to the EPiServer Gadget Contest 2009.

Currently this proof of concept implements the Google Wave Panel API and embeds a specific Google Wave into the gadget. The API available at present is rather limiting but I’m sure Google will expand it over time.

Obviously for this you need EPiServer 6 CMS CTP 2, Microsoft ASP.MVC and Google Wave (Sandbox) Activated Account (and friends to talk to). 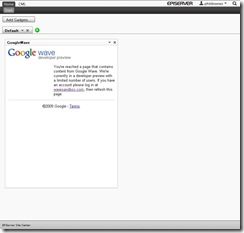 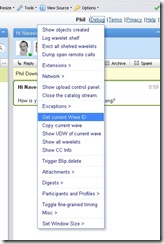 I’ve opened up the following wave to public access to allow it to be loaded in through the Google Wave Embed Panel API. 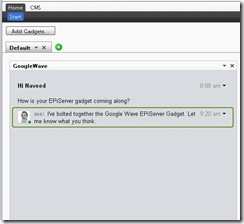 My submission is certainly not a polished gadget but more a proof of concept which definitely has the potential to be expanded on as the Google Wave API is opened up.