Blocks is a new building block introduced in EPiServer CMS 7. A block can be used in several ways, it can be used as a “complex” property when modeling content types. It is also possible to create stand alone instances of blocks (shared blocks) that can be reused on content areas on other content  instances. Joel have written an good post about how to work with block properties (see http://joelabrahamsson.com/entry/working-programmatically-with-local-blocks-in-episerver-7 ). In this post I am going to explain a bit about how to work programmatically with shared block instances.

There are some implementations of IContent built into CMS like PageData and ContentFolder (used to group shared block instances) and it is also possible to register custom IContent implementations.

If you look at BlockData though you will notice that it doesn’t implement IContent, how is then shared block instances handled? The answer is that during runtime when a shared block instance is created (e.g. through a call to IContentRepository.GetDefault<T> where T is a type inheriting from BlockData) the CMS will create a new .NET type inheriting T using a technic called mixin where the new generated subclass will implement some extra interfaces (including IContent).

That means that a shared block instance of T will implement IContent while an instance of T that is a property on a Page will not. If you attach a debugger and look at the instance returned from GetDefault<T> (where T is a type inheriting BlockData) you can see that the instance looks like: 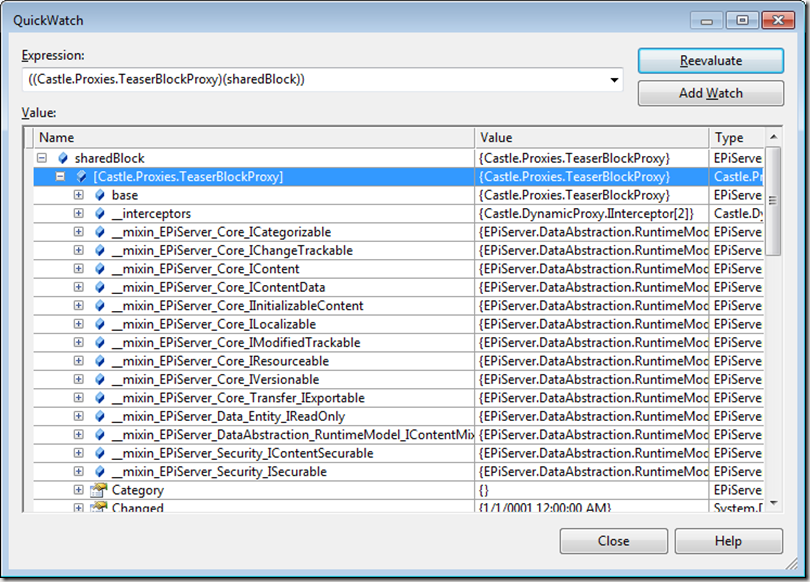 Here we can see that the shared block instance have some extra fields for each interface that is mixed in.

As described above IContent is a required interface for content. In addition to IContent there are a number of behavioral interface that is optional for a content type to implement depending on if that behavior should be supported. Below is a list of the behavioral interfaces with a short description on what they contain/support:

Implement to support access checks that is also possible to modify through IContentSecurityRepository.

Implement to control if the instance should implicitly be added to export package when referenced (e.g. from ContentArea).

Implement if is should be possible to route to instance (without partial router).

The suggested pattern when working with metadata on content is to cast the instance to the corresponding interface with as operator and then act depending on if the interface is implemented or not like in example below:

instead you can use operators is, as or method IsAssignableFrom like:

Old post, but helped to find a way to retrieve Modified date for the block :) thx

Very nice explanation. When you see this constructs in code, it is hard to believe why this magic has to happen.

Optimizely shortcuts in CMS 12 will get a trailing slash appended!

Not all URLs will work when the trailing slash is added, and that could cause problems. Hopefully it will be fixed soon.