In EPiServer CMS 6 R2 it’s possible to specify if the dynamic content should be treated as an inline element or as a block element. The reason for this is for the editor to handle the dynamic content differently depending on what html it actually produces so that the editor does not create incorrect html. This can be done by implementing the interface IDynamicContentDisplayType with has the following method:

Default behavior is to render as an inline element which is the way dynamic content was treated in EPiServer CMS 6. However, if you inherit from DynamicContentBase the default value will be block element. This can be changed by overriding the RenderAsBlockElement-method.

The first one is the direct preview which is rendered directly in the editor. This might look something like the following screen shot where a dynamic content is shown with an image as preview: 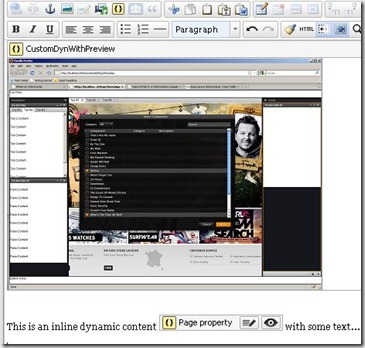 Technorati Tags: dynamic content,preview,EPiServer CMS 6 R2
possible to enter any html in the editor, even some of the elements described above, but if you are getting into trouble because of the preview html it’s recommended to use the full blown preview instead.

It’s possible to preview the dynamic content outside the editor which does not have the limitations as the direct preview. The following screenshots shows the preview of the built in page property plug-in:

Default behavior for dynamic content is to not render direct preview and to use the same html as for the site for the full blown preview. This can be changed however, by implementing the following interface :

If you want to create a custom inline preview but use the standard rendering for your dynamic content in the full preview you can do this by returning null from the CreateFullBlownPreviewHtml method. The preview dialog will then fall back to the Render or GetControl methods as it would on a page.

How the built in page property dynamic content works

And these are treated as block elements:

Since the PropertyDataType reflects the storage mechanism and not how the actual property is rendered it’s possible that you want to change how your property should be treated when inserted as dynamic content. This can be done by implementing the IDynamicContentDisplayType interface. For instance, PropertyXForm uses PropertyDataType.String to store the id of the form as a GUID but since it should be treated as a block element it implements this interface and changes the display type to block.

I have a small follow up question on the "RenderAsBlockElement" addition. Does this mean that it is possible to avoid the wrapping "p-tag" that you get today with the current editor?

@Gustaf: Exactly, block element can end up on the "top" level in tiny mce thus removing the need for a wrapper.