We added a new major improvement to the block publishing that I would like to share with you.

Previously, the editors were able to only inline edit existing blocks. However, whenever a new block was needed then they still had to use the default form, that caused the current content context to switch. 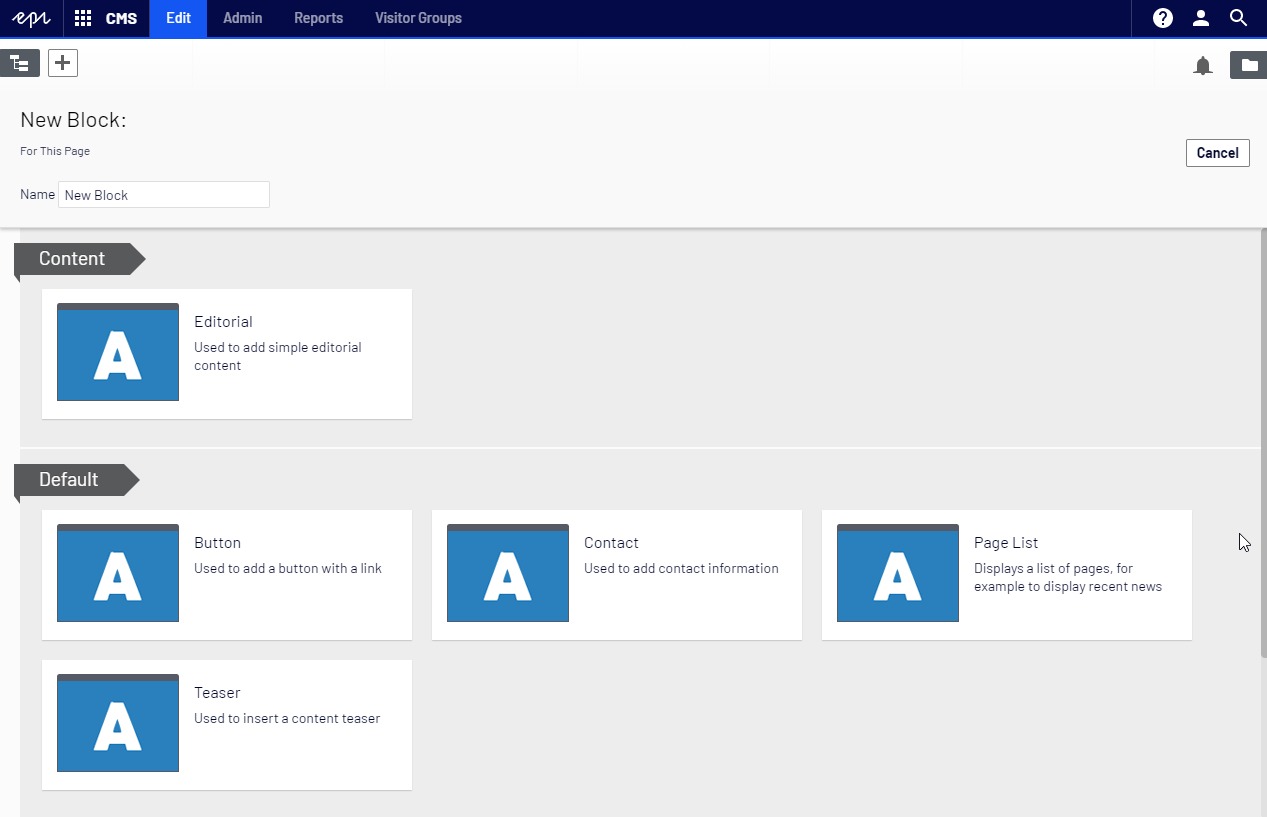 It was quite annoying especially in nested block scenarios where you had several levels of nesting i.e. Bootstrap Row Blocks containing Content Blocks.

With https://nuget.episerver.com/package/?id=EPiServer.Labs.BlockEnhancements&v=0.5.0 it is now possible to create new blocks using the same inline form, without the need to ever leave the current context.

The best part is that we support nesting. As many levels as needed. And it works both in On-Page Edit (OPE) and in regular Forms view.

After upgrading to v0.5 the "Create a new block" link will no longer open a big content type selector and switch editor's context to the newly created content item.

Instead a simple dialog will be presented: 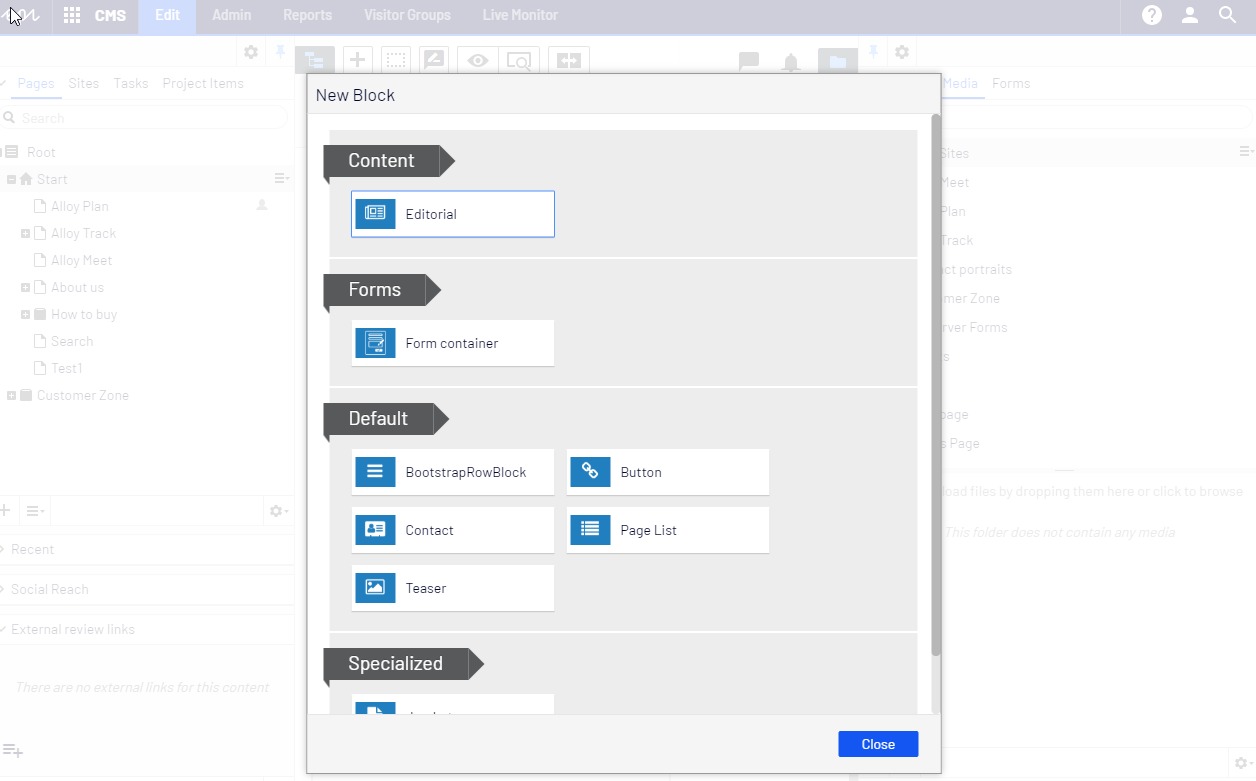 After choosing the content type the editor will see the inline edit form straight away. All properties will be included (both required and optional): 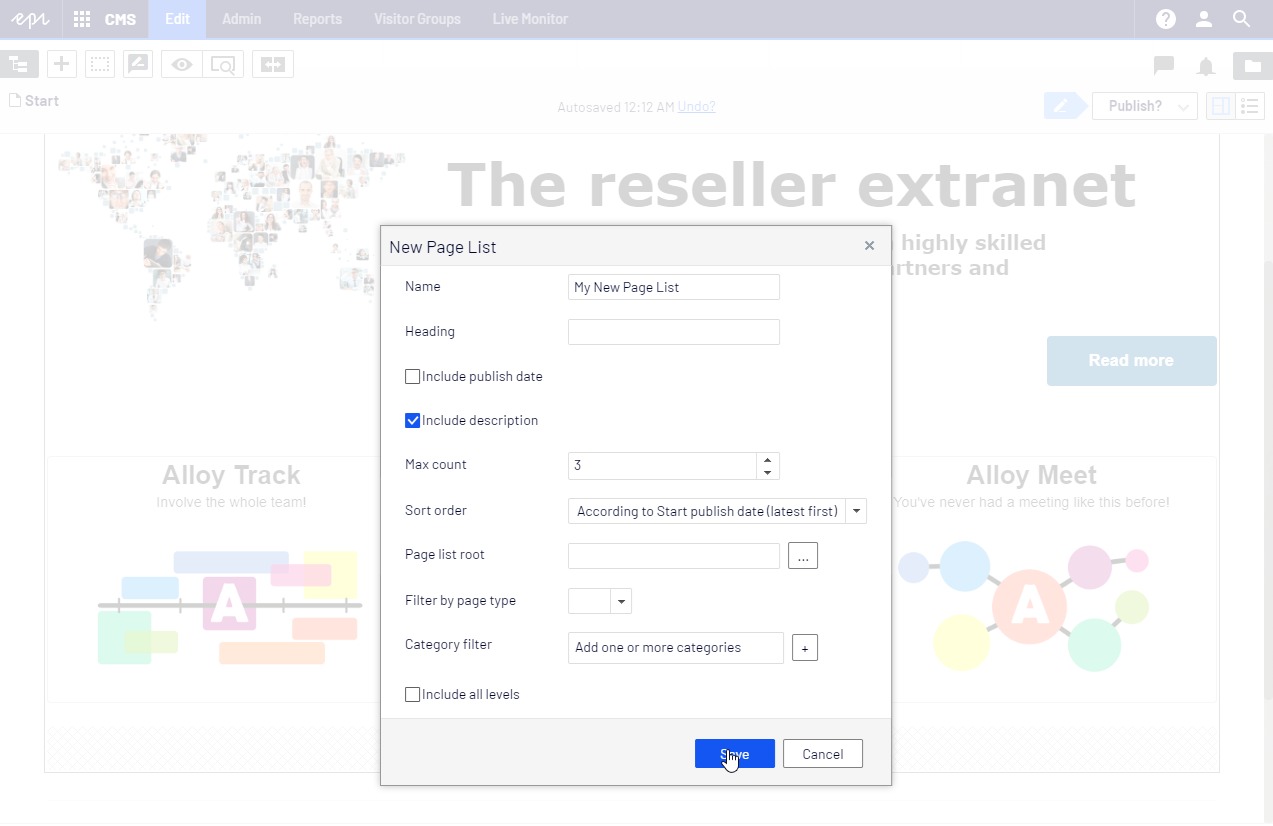 Please note that the new commands are available both from the Forms View and the On-Page Edit.

Please take a look how it all works:

This is an incredibly cool project!!!

This project keeps getting better week after week, this is a really nice enhancement!

In general context switching is one of the worst parts of the user interface, adding this will make a lot of people happy

This is really nice! Are there any plans to include this in the core product?

That's why we love Epi

Very nice work Bartosz - it's fine to see that the intention for how most blocks block be used when the UI for Episerver 7+ was designed - i. e. local blocks with inline edit - has finally been realised. I really like how new blocks automatically are created in the local folder for the current object. One small glitch that I noticed was that when I have a lot of properties on a block, the dialog becomes higher than my screen and the save/cancel buttons are then invisible before I move the dialog on the screen. But all in all - a very nice and welcome addition!

Thank you very much.

Linus, is this the issue that you are referring to? https://github.com/episerver/EPiServer.Labs.BlockEnhancements/issues/23

Been looking for this feature for a long time. Nice work.

Yes Bartosz - that seems to be the same issues that I've been experiencing.

Linus, that issue has been resolved in https://nuget.episerver.com/package/?id=EPiServer.Labs.BlockEnhancements&v=0.5.1

Thanks for quick feedback! :)

This is a great feature, for editors with publishing rights. For other editors this feature is just in the way of everything else.

The only option in the new block window is Publish. If you do not have publish rights, "Publish" remain the only option. You cannot use this new feature, and must then click this new block-windows away. Then the only thing you can do is to go to normal block-editing instead. There you can submit the block in "Ready to publish"-mode.

This Block Enhancement-functionality should only be visible for editors that can use it (for now that is Publishers). Best would be if user do not have publishing rights, the Ready to publish-option would be available instead.

You are correct Henning. It will be solved soon.

v0.5.2 now supports scenario that you described. Additionally we started to check the access rights so:

If you can Publish you will see the Publish button

I would really appreciate your feedback if the new version fixes the issues you raised.

Hi Bartosz, thanks for looking into this so fast.

I cannot see a Ready to publish button inside the inline-block-edit window. And the ready for publish-alternative will not appear in the block hamburger menu either until a CTRL-F5/have been done, after doing that I can see Ready to publish in that menu.

Another problem I just found is that if the block uses the ImageVault nuget for images, the imagevault property will appear empty in the enhancement-window (this happens also for site admins). You will be able to set a new image from the window, but that will overwrite the existing one (that you cannot see).

Tested some more, and the ready for publish do appear without a reload now in the block menu. I think it was something about me being logged in with different browsers with a publisher and an editor without publishing rights on the same page  But it will not show the Mark as Ready to publish-button, I guess it should be located about the same place as the Publish button inside the inline block window.

ImageVault is a 3rd party component, we already have an issue for that https://github.com/episerver/EPiServer.Labs.BlockEnhancements/issues/26 - waiting for feedback from guys responsible for ImageVault.

About the missing button, for now, 'Ready to publish' is only available in the context-menu. We did not add it to the inline-edit dialog yet, however, it seems we should have :)

For now, please use the context menu in the content area.

Something has happen, se my thread here
https://world.episerver.com/forum/developer-forum/-Episerver-75-CMS/Thread-Container/2019/12/error-in-inline-edit-after-update/